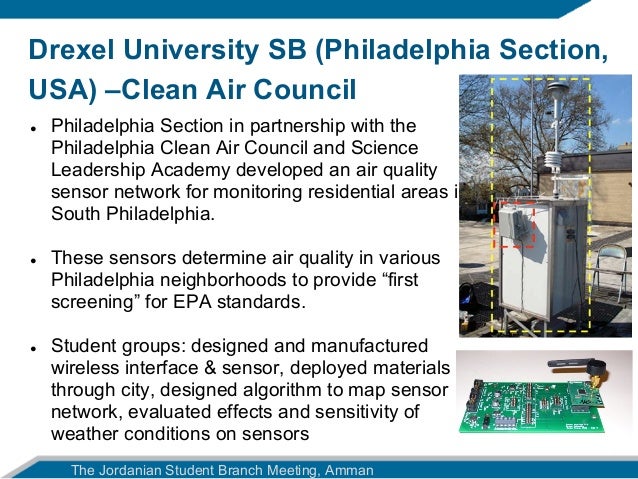 Most of us take for granted that we are breathing clean air. However, in recent years, innovative technologies in natural gas exploration, such as horizontal drilling and hydraulic fracturing (sometimes called “fracking”), have unlocked access to deposits that were previously unavailable. Although many of them are near densely populated areas, few monitoring solutions focus specifically on the effects of natural gas extraction on air quality.

Extraction activity in the Marcellus Shale region, located in central Pennsylvania and estimated to contain over one trillion cubic feet of natural gas, has raised questions about the environmental effects of drilling. This is why, in 2009, IEEE Student Members at Drexel University in Philadelphia began a multi-year collaboration with North Penn High School and the Clean Air Council, a consortium of 11 community lung associations in Pennsylvania, New Jersey, and Delaware. Their objective was to develop air-monitoring technology for the South Philadelphia area.

In previous years, members of the IEEE Student Branch at Drexel had designed and made wireless interfaces and sensors, stationing them throughout various Philadelphia neighborhoods. They had also designed an algorithm to map the sensor network, created hardware and software interfaces, and then evaluated the effects of and sensitivity to weather conditions on the sensors.

This time, however, two senior design teams, led by three Student Members, obtained a $8,829 grant from EPICS in IEEE to focus on the redesign and deployment of air-quality monitoring devices near Marcellus shale sites. The data gathered by the sensors would be used in an effort to determine the effects of those drilling operations on people’s health. Sensors were required to meet performance specifications provided by the Clean Air Council.

From the beginning, the university students have partnered with North Penn High School science classes to place the sensors and analyze the data gathered near their school. This time, about 35 North Penn students – all of them members of the school’s EPICS Club – participated in the real-world engineering process, building out sensor nodes and connecting them to the existing network.

The broad involvement with and by the high school students gave them real-world experience with engineering applications and their impact on people’s lives. Even more encouraging, the partnership the IEEE Student Members at Drexel formed with North Penn High School is a model that could be expanded to other area high schools. The collaboration was so worthwhile to everyone that Drexel, North Penn High School, and the Clean Air Council agreed to this ongoing three-way plan:

Each year’s class will hone the design of the previous one, developing more effective, efficient, and smaller sensors and improving monitoring methods.
The data gathered over several years will be used to assess the impact of new gas extraction technologies on the region.
This project will serve as a prototype for other areas potentially impacted by natural gas extraction technologies. As the sensor network expands and improves, residents of the Philadelphia area and around drill sites are benefitting through greater awareness of air quality issues. This will enable them to have a voice in potential changes in regulatory policies affecting air quality. Because nothing is more important than the air we breathe.